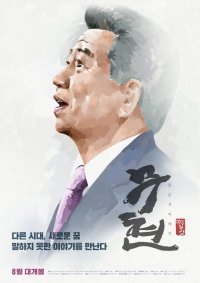 Synopsis
We are coming to you now.

- "From The Story of Two Cities" by Charles Dickens

While writer Kim Won-myeong was thinking hard about the injustice happening around the world, he thought about the time he met Roh Moo-hyun, his father's friend when he was young. Drawing into the seventh year of his death, Won-myeong sets out to find people who have had connections with Moo-hyun in the past. The movie is based on Yeong-nam and Ho-nam, two cities that trace back the steps of Roh Moo-hyun who poured out his passion on the progress of these ares and breaking down authoritarianism. We understand the movie through the words of those who remember him.

View all 66 pictures for "Moo-hyun, the Story of Two Cities"

Moo-hyun, the Story of Two Cities | Videos | Suggest a video

Moo-hyun, the Story of Two Cities | Links | Suggest a link