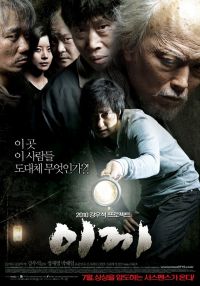 Movie remade from a popular internet cartoon. The story of the few people who live in a village, and a man who comes to the village for his father's funeral. He tries to figure out the mystery of his father's death, but the villagers watch his every move.

Note
RYU Mok-hyeong, a member of a small prayer house located in a remote mountain village, is well-respected for his leadership and gift of speech. In order to build a new prayer house Mok- hyeong leaves the mountains to build a new village with the help of his friend, Yong-duk. Many years pass and Mok-hyeong is discovered dead after sharing a bottle of rice wine with Yong-duk. Mok-hyeongs good for nothing son, RYU Hae-guk, arrives from Seoul to attend his fathers funeral. Hae-guk soon realizes that the villagers are trying to hide something from him leading him to seek the help of PARK Min-uk, the public prosecutor responsible for his demotion to a local branch during his more reckless past. Hae-guk plans to conduct his fathers autopsy himself, but arrives at his fathers grave only to find his corpse missing. Hae-guk suspects that Yong-duk is responsible.

View all 69 pictures for "Moss"