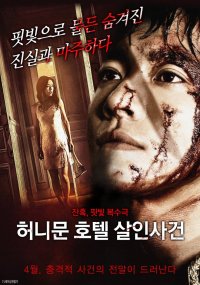 "The Honeymoon Hotel Murder" is a collaboration between Korea and China.
Synopsis
Woodaz is a bellboy who decided that he and his wife would spend their honeymoon in the president suite of the hotel where he works at. However, the manager doesn't keep his promise and gives away the room to Pei, a popular actress. Woodaz goes up to the room to talk to the actress for help, keeping his promise with his wife but ends up witnessing a murder and becoming the suspect. While he's running from the police, unexpected things keep happening at the hotel...

View all 12 pictures for "Murder At Honeymoon Hotel"