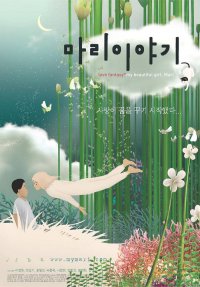 Synopsis
A secluded seaside village. Namoo is a twelve-year-old boy who has lost his father and lives with his mom and grandma. His only friends are Junho, who is the same age as he is, and Yeo, his cat. One day in the stationary store in front of his school, Namoo discovers a mysterious shining marble. He thinks about it all night, and the next day he runs to the store to buy it, but is disappointed to find that it is gone. Namoo and Yeo are playing near the old lighthouse when Yeo runs inside. Namoo follows the cat in and is wandering around when he discovers the mysterious marble on a shelf.... is an animated feature film by image-maker and director LEE Seong-gang, who attracted the international animation industry's interest with , recognized also at the Annecy International Animation Festival, of reknown fame. This work will show that LEE Seong-gang now establishes himself as an animation artist capable of representing Korea.

View all 33 pictures for "My Beautiful Girl, Mari"