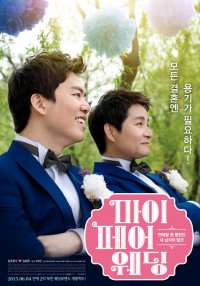 Synopsis
On September 7, 2013, two men are married at Kwangtong Bridge. They say their vows in front of Seoul citizens, and showcase a small musical performance they had prepared. As the happy celebration reaches its climax, the hall is bombarded with trash and vulgar profanity. Despite this, the two men raise their voices to say they are happy, and the deserved and natural wedding ends with blessings.

View all 34 pictures for "My Fair Wedding"