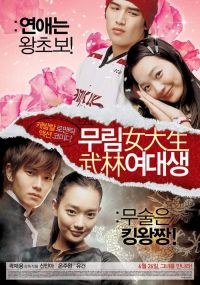 KANG So-hwi, a beautiful martial arts prodigy, is about to embark on a journey into adulthood. But her journey is like no other. Her super-human strength and martial arts prowess scares away her fellow undergrads and even the boy she has fallen for. Devastated, So-hwi decides to give up martial arts and takes a different path. Her father, a martial artist himself, is afraid of losing an heiress to the familys martial artistry, and missions So-hwis old buddy Il-young to persuade her to stay in the field. Meanwhile, the evil Heuk-bong provokes a war to conquer the martial arts world with the legendary Fine Blade he stole in the past, killing every swordsman one after another. So-hwis father comes to a showdown with Heuk-bong, but the battle leaves him fatally injured. On the brink of her fathers death, So-hwi picks up a sword again with a burning desire for revenge.

My Mighty Princess
Stream and watch

View all 37 pictures for "My Mighty Princess"