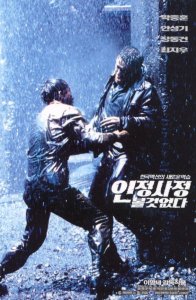 Synopsis
As passersby run for cover in the torrential rain, a mysterious man walks up the Forty Steps and Slashes another man to death. The killer disappears with a briefcase full of cash while his accomplices finish off the dead man's subordinate. The initial police investigation reveals an underground drug world at war. Veteran police detective Woo is assigned to this case. A workaholic with no personal life, Woo works by instinct and frequently defies police regulations. Unlike Woo, his partner Kim is a rational and sensitive family man. The two join forces with four other detectives to pursue the mysterious assassin, Jang Seong-min. However the group barely manages to have several close encounters with Seong-min. Woo and his team devises an air-tight plan to arrest him by disguising themselves as employees on a train that Seong-min is scheduled to be on for a drug deal. As all hell breaks lose between Woo's men and Seong-min's, Seong-min once agin escapes the scene, but not before stabbing Kim. A furious Woo charges towards Sun-min's hometown, expecting to have another chance at catching him. At last, the two men face off for their final showdown.

View all 79 pictures for "Nowhere To Hide"