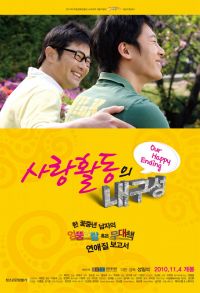 Sin-goo is the owner of a car bar near Daehak-ro. His 40 years of life exist without sex because he is always so busy, but he lives on a joy of making money. Joon-seung is a 20 year-old guy who recently got together with his birth mom; even though he was hard to say Mom to her mother, he really wants to help her out by making some money.
Joon-seung happened to work for Sin-goo as kitchen porter. Joon-Seung fell for Sin-goo who he felt he was like a thoughtful brother, and Sin-goo also fell for Joon-seung. One day, they spend the night together due to Sin-goos heavy drinking; Sin-goo also has relationship with his alumna, Seong-ja. He blames everything on an alcohol. But later on, the relationship between Sin-goo and Joon-seung gets more and more serious. On the other hand, Seong-ja thinks Sin-goo as her real lover, while Sin-goo is dazed by the fact that Seong-ja and Joon-seung are mother and son.
Pretty middle aged guy Sin-goo gets blind love from both Seong-ja and Joon-Seung. Will his confused sexuality and loves of his lifetime end happily?

View all 17 pictures for "Our Happy Ending"