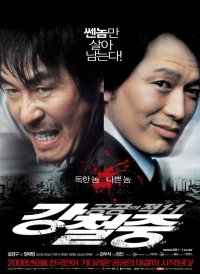 Synopsis
Kang Cheol-joong has been a detective fighting crime for 15 years, but he leads a financially insecure life. Meanwhile, the men hes put behind bars in the past are now doing much better for themselves, which drives Cheol-joong to regret choosing to be a cop. On the other side of the spectrum is Won-sool, the wealthy honcho of a large network of businesses including finance, butchery, construction, and entertainment, as well as a number of clubs. He trains young boys to work for him while at critical times forcing them to take the fall on his behalf by falsely confessing to the crimes he committed. Kang Cheol-joong feels an incredible anger towards Won-sool, who is quick to turn young boys into criminals for his own selfish gains. Cheol-joong vows to get him.