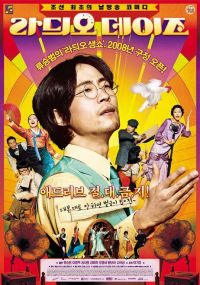 Kyoungseong station, the first radio station of Korea established in the 1930s, is given the mission of producing a live serial radio play, Flames of Love. Those in charge make an unlikely team: Lloyd, a good-for-nothing producer; Man-cheol, an announcer and Lloyds only friend; NOH Bong-al, a writer who never manages to write an ending; K, an independent activist and sound effect technician; Myeong-wol, a former gisaeng; Mari, a jazz singer Mari; and station errand boy Sun-deok. Even amid the ensuing chaos, the play becomes increasingly popular with each passing day. But how will it end up?

View all 57 pictures for "Radio Dayz"