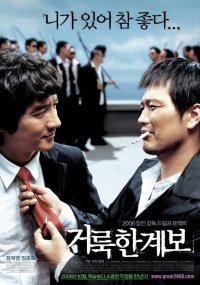 Synopsis
An eccentric but faithful mafia, Chi-seong is sent to prison for his part in a gang fight. But when his parents are attacked by a rival mob and his own people take no action, he realizes that a decade of loyalty towards the gang has become futile. Determined to confront his own boss, he finds a way to escape from prison with his fellow inmates. Meanwhile, his friend Joo-joong is given the task to stop Chi-seong, forcing him to choose between the bond of friendship and loyalty towards the gang.

View all 52 pictures for "Righteous Ties"