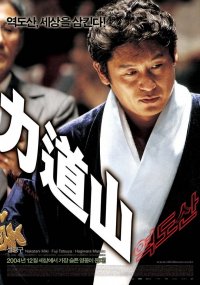 "Rikidozan" is a Korean-Japanese co-production
Synopsis
Rikidozan seemingly had the world in his grasp, but he was not happy. In 1950, realizing that unless he was born Japanese, he will not reach the pinnacle of a sumo wrestling career, and gives up trying. Spending his days drinking and picking fights, he suddenly chances upon pro wrestling, and heads to America to seek his fortune. Two years later, he returns home as a pro wrestler. In his historical first match, he defeats the American opponent with a single karate chop and the Japanese crowd worships him as their hero. However, thinking that he now truly has the world in his grasp, Rikidozan's life starts to unravel.

View all 40 pictures for "Rikidozan"