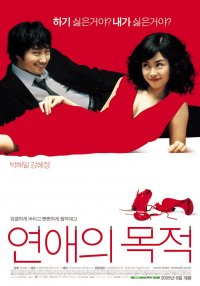 Synopsis
Lee Yoo-rim is a high school English teacher. He's cute, clever... and shameless. Choi Hong is a student teacher, even though she is one year older than Yoo-rim. She's cynical and always plays hard-to-get when a man shows interest in her. While going out for drinks one night, Yoo-rim suddenly tells Hong that he wants to have sex with her. Hong is hardly impressed. And so begins a battle of will and wits, both between each other and within themselves, as both Yoo-rim and Hong are unsure of what each other wants and what they want themselves. Dating and desire mix explosively. What is the point of this strange relationship? What is the object of their desire?

View all 61 pictures for "Rules of Dating"