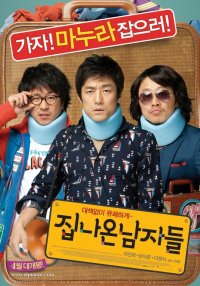 Also known as "Looking for My Wife"
Synopsis
Popular music critic Seong-hee (Ji Jin-hee) publicly requests a divorce from his wife Yeong-sim during a live radio show. He sets off on a trip with his old friend Dong-min (Yang Ik-joon), but heads back home, worried that Yeong-sim may be in shock. But he discovers a letter from Yeong-sim, who had already left him before his radio show. He forces Dong-min to help him track down his wife, guided by a cell phone Yeong-sim used 10 years ago and clues provided by a fortuneteller and a conman (Lee Moon-sik) who claims to be her brother.

View all 67 pictures for "Runaway from Home"