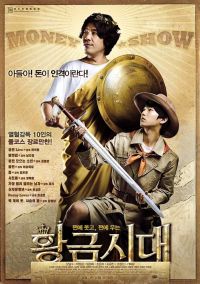 The 10th JIFF Anniversary Film, Short! Short! Short! 2009: Show Me the Money directed by 10 filmmakers including Lee song Hee il just completed Break Away(2009), Kim Young Nam the director of Boat(2009) which opening soon nation wide, Choe Equan who directed the feature Life Is Cool(2008) and Milky Way Liberation(2007)s Yoon Seong Ho and director Yang Hae Hoon of Whos That Knocking at My Door?(2007) is A Digital Omnibus Feature Film which consists of 10 short episodes (each film runs up to 10 min) interlaced with money anecdotes that everyone might undergo at least once in their lives.

Segment "Coin Boy" ("동전 모으는 소년") directed by Kwon Jong-gwan (권종관)
This film is led by a secondary school boy who collects coins in a huge glass jar. He collects coins while whishing his naive dreams to be true. However, he fails to get what he was hoping to buy, and he uses the coin jar as killing method.)

Segment "Penny Lover" ("페니 러버") directed by Kim Seong-ho Kim Young-nam (김성호)
A Woman In Her 30S Receives A Cent From Her Sex-Partner Who Is Younger Than She Is. After Having To Hear From Him That He Is Seeing Someone, She Is Going To End This Relationship. What Should She Do With The Cent Given?

Segment "Hundred Nails And A Deer Antler" ("백 개의 못, 사슴의 뿔") directed by (김영남)
To Get Paid In Arrears, A Female Factory Laborer Visits A President Of A Factory Which Has Been Closed Down For Months. All Of A Sudden, Their Conversation Starts To Face Where It DidnT Intend To; The One Who To Get Paid And Another One Who To Pay Humorously Unveil An Appealing Present Situation.

Segment "Saw" ("톱") directed by Kim Eun-kyeong (김은경)
Hardware Store Guy About To Close The Store After Such A Long Day, But A Woman Just Happens To Enter The Store And Look For A Saw.

Segment "A Tip For Cigarettes" ("담뱃값") directed by Nam Da-jeong (남다정)
A News Reporter Came To The Park To Cover The Teenagers Asking Homeless People To Buy Them Cigarettes. The Reporter Asks A Favor To A Smoker Teenage Girl, And She Does Not Seem To Reject...

Segment "Sitcom" ("시트콤") directed by Yang Hae-hoon(양해훈)
In A Booth At The Club, Two Men Dressed In Indian Costumes Enjoy The Last Supper As They Planned. In The Next Booth, Moon Kyeong-Mi, The Blue-Blooded Girl Is Playing With Action Heroes. As Everyone Gather Around Behind Stories And The Wirepuller Reveal.

Segment "Fastest Man In The World" ("가장 빨리 달리는 남자") directed by Chae-gi (채기)
The Useless And Useful Day In The Life Of A Homeless Person, The Fastest Walker Without Even Putting His Feet On The Ground.