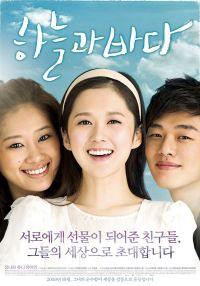 Singer-turned-actress Jang Na-ra, nominated for The Best Actress Award at the Daejong (Grand Bell) Film Festival, the country's most prestigious film awards, plays the role of an autistic musician in the movie ``The Sky and the Sea,'' which is the story of the friendship between three friends ― Sky, Sea and Jin-gu. However, their moment to leave one another comes closer.

View all 39 pictures for "Sky and Sea"