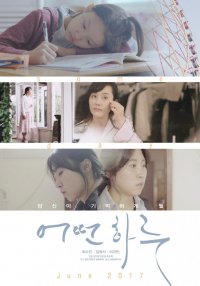 Synopsis
Ep.1 "Change of the Season" - 11 year-old Yeon-joo (Choi Soo-in) was given homework to take pictures with her parents on trip during spring break but she's concerned as she doesn't want her classmates to find out that her parents are divorced.

Ep. 2 "Lola" - Lola (Kim Yeong-seo) majors in ballet but when she gets married she adjusts to a new life in the country. One day, she's invited to stand for a show called "Hamlet" and decides to go to Seoul.

Ep.3 "Atone" - Yeon-hee (Lee Ji-min-I) has been the breadwinner of the family as she taks care of her mother who has Alzheimer's and rebellious sibling. Life is cruel to her but it's even more so when they are told to evict from the rented apartment.

View all 13 pictures for "Some Day"

Some Day | Videos | Suggest a video

Some Day | Links | Suggest a link