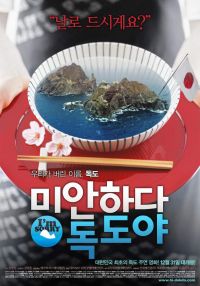 Dokdo is an easternmost isle of Korea, but Koreas sovereignty over the isle has been challenged during its long history. This film portrays people who love this isle and their efforts in informing Dokdo to the world. From a daily life of an old man, KIM Sung-do, who lives on Dokdo with his wife, to an elementary school girl who sends letters to foreign friends to explain about Dokdo, this impressive film describes the affection of ordinary people on the islet. This also depicts a significant event, in which SEO Kyung-duk, a Korean PR expert, bring together 6,000 participants to hand-paints the national flag of Korea, and then float it on the East Sea East to promote Dokdo

View all 19 pictures for "Sorry, Dokdo"