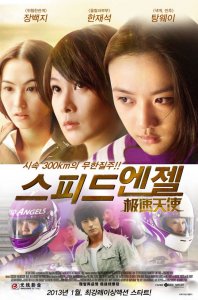 Gao Feng goes to the a bank in Shanghai to pay Han Bing. When he leaves the bank, he is robbed by four men. Gao Feng jumps into a taxi cab driven by Yu Mei (Tang Wei) and offers her a large amount of money to catch the robbers. Yu Mei zooms through the streets of Shanghai and Gao Feng takes notice of her remarkable driving skills. Gao Feng later recruits Yu Mei to join the "Speed Angels." Meanwhile, Yu Mei suffers from a traumatic childhood incident that makes her crumble under pressure. Can the "Speed Angels" win the competition?

View all 11 pictures for "Speed Angels"