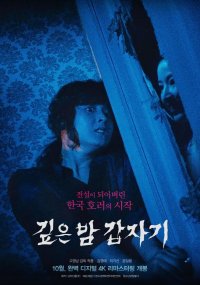 Original release: 1981/07/17
Also known as "Suddenly at Midnight", "Suddenly in the Dark"
Synopsis
A wealthy biology professor hires a young housemaid who is the daughter of a recently deceased priestess. The professor and his wife initially welcome the young woman, but start to feel uneasy upon seeing her wooden doll that had also appeared in his wife's dreams. Her fears cause the wife to attack and kill the daughter and subsequently be haunted by nightmares of the doll.

View all 17 pictures for "Suddenly in Dark Night"