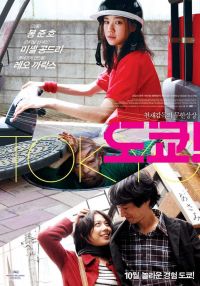 TOKYO! is an omnibus film coproduced by Korea, Japan and France

1) Michel GONDRYs Interior Design is the surreal fable of a couple who move to Tokyo in search of a future. While Akiras ambition (to direct movies) is clear, Hiroko drifts, gradually losing control over her life. Left alone, she wakes one morning to find a hole in her chest... By the end of the day, Hiroko has transformed into a chair. A series of nightmarish adventures and transmutations ensues, until at last Hiroko is rescued by a kind stranger and her new, fulfilling life  half woman, half-chair  can begin. (Japanese language)

2) In Merde by Leos CARAX, a mysterious, sewer-dwelling man spreads confusion on the streets of Tokyo through a succession of irrational and provocative acts. Who is he? Why is he here? What does he want? The citys population becomes obsessed by this strange phenomenon. When The Creature of The Sewers, as the media have dubbed him  discovers a hidden World War 2 arsenal, confusion turns to terror, as he stages a succession of bloody grenade attacks. Captured by the police, he refuses to talk, until a fifth rate French lawyer arrives to defend him. (Japanese & French language)

3) Shaking Tokyo by BONG Joon-ho tells the story of Teruyuki, one of Japans many hikimori  citizens who have withdrawn from all contact with the outside world. When a pizza delivery girl faints in his apartment during an earthquake, the unthinkable happens  Teruyuki falls in love. And when she does not return, he is forced to take an unimaginable step: for the first time in 11 years, Teruyuki leaves the dead security of his apartment for the streets of Tokyo, only to discover a city of hikimori..(Japanese language)