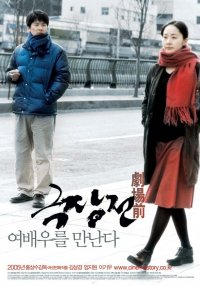 Synopsis
One winter's day, a 19 year-old boy runs into a girl whom he used to like in the past. They go for several rounds of drinks and attempt to have sex at a motel but he isn't able to get an erection. He tries a second time but fails again. Suddenly, he speaks of suicide and the girl calmly agrees to join him. Without hesitation they both swallow a mouthful of sleeping pills to end their lives. However, their suicide attempt fails. The boy returns home safely but he can't avoid his mother's cold mockery. In the second part of the film, the actress who played "the girl" in the first part walks out of a movie theatre. A man follows her. Behind him, there is a poster of "the boy" on the wall.

View all 70 pictures for "Tale of Cinema"