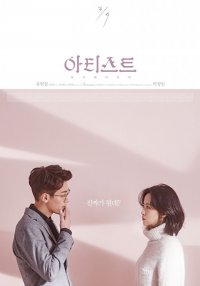 Formerly known as "Gisel - Born Again" (지젤, 다시 태어나다, ji-jel, da-si tae-eo-nada)
Synopsis
"Behind the irony of art." Oh In-sook, who goes by Gisele in the art world, is a failed artist with nothing going for her. During her shift at her part time job, she meets a cunning and canny art sales representative Jae-bum. Jae-bum believes that Gisele has the potential to become a prominent artist and decides to represent her. He and his colleague James, through their ingenious sales efforts, begin to raise the value of Giseles paintings, causing Gisele to gain immense fame. As she is ready to bathe in her success, she unexpectedly dies of reasons unknown shocking the art community. Jaebum sees this as an opportunity to hike the prices on his deceased clients paintings and decides to go all-in in doing so. However, Gisele miraculously gains consciousness like the Lazarus syndrome, denting Jae-bums scheme. In order to save his career, Jaebum suggests to Gisele to stay dead and aims to strike a deal with her.

View all 47 pictures for "The Artist: Reborn"