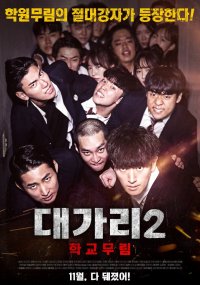 Synopsis
The school finds peace with Han-cheol's dropping out. Min-soo, whose fighting abilities have intensified, bluffs his friends. Sang-gil discovers that the number of students in the school's secretly run fight club is increasing and asks Yoon-hyeok who the prime leader of the club is. Yoon-hyeok tells him it is Min-soo and Jin-man. Jin-man and Min-soo are wrongly accused and sought for the fight club, when Yeon-ji, who abandoned them, returns. They reject her, but end up being in a good relationship with her again. Then they run into Ga-yeong and sneak into a fight club meeting...