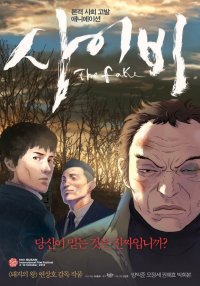 Synopsis
Who is good and who is evil? What is the boundary between them? An animated thriller about the tension between a good-hearted person speaking falsely and an evil-natured person speaking truthfully, and of those that surround them. "The Fake" is the much-anticipated sophomore feature of Yeon Sang-ho, who took the international festival circuit by storm with his incendiary debut "King of Pigs", which debuted at the 2011 Busan International Film Festival, during which it was awarded three prizes (NETPAC, DGK Best Director and CGV MOVIE Collage). It went on to a slew of others events, where it bagged many more accolades. Each of Yeon's works have sought to explore one negative facet of life in Korea. His first feature "King of Pigs" was a brutal and often harrowing look at bullying in high school. Last year, the animation director released "The Window", a mid-length work based on Korea's obligatory military service, another system fiercely governed by hierarchy. In "The Fake", Yeon has opted to examine the strange world of religious cults and faith. His latest work was also selected for the 2012 Asian Project Market, which takes place during the Busan Film Festival.

The Fake | Videos | Suggest a video

The Fake | Links | Suggest a link