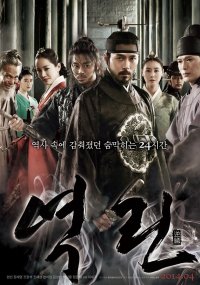 Synopsis
As the year 1777 opens, King Jeongjo enters the second year of his reign, which is consistently under threat from the opposing Noron and Soron factions. To successfully defend his royal power, Jeongjo draws upon his stores of courage and relies heavily on his loyal servant Sang-chaek. In a shocking twist, Sang-chaek turns out to be an assassin who was sent into service in order to kill Jeongjo. After witnessing King Jeongjo's capacity to justly rule the people, however, Sang-chaek comes clean about his true identity, and is banished from the court. As he leaves the palace, however, his eye catches sight of Sal-soo, the deadliest assassin in Joseon. Sang-chaek frantically returns to the court, only to find Sal-soo locked in combat with Jeongjo

View all 68 pictures for "The Fatal Encounter"