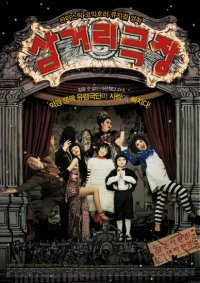 Also known as "Midnight Ballad For Ghost Theater"
Synopsis
So-dan is a girl bored with her tedious life, but she manages to find some distraction in the run-down Three Corners Theater. Initially she goes into the building as a way of finding her grandmother, who is said to have gone into the theater and never came out. She simply vanished. During the day there are few spectators at the theater, but once night falls, ghosts stage a cabaret at Three Corners Theater. In this grotesque and eerie place, So-dan has an uncanny experience- one that engages the senses and disregards the passage of time...

View all 37 pictures for "The Ghost Theater"