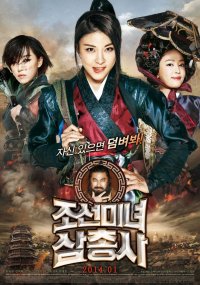 Previously known as "Three Joseon Angels" on HanCinema
Synopsis
Based in the Joseon times, this action historical is about a group of three beautiful ladies starred by Ha Ji-won, Kang Ye-won and Son Ga-in.
Ha Ji-won takes on the role of Jin-ok, leader of the group and inventor of unique weapons with the ability to disguise herself in variety. She is about to upgrade her action from what we have seen so far and add a little bit of airhead in it.
Kang Ye-won is Jin-ok's co-worker and the only married one in the group. She is better at throwing daggers than cooking and better in tumbling than housework. She is the funny one being the 'idiot' ajumma' (married woman).
Son Ga-in is the youngest of the group. She is a fist first and talk later kind of person who is blunt and chic and is about to take over the hearts of men all over the country.
Other than these three, Ko Chang-seok take on the role of monk Moo-myeong and Joo Sang-wook, the role of warrior Sa-hyeon who threaten the three angels.

View all 116 pictures for "The Huntresses"

The Huntresses | Videos | Suggest a video

The Huntresses | Links | Suggest a link