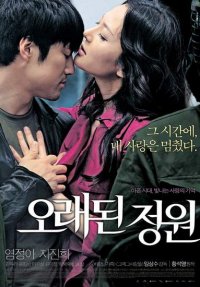 Hyun-woo steps out of prison after a 17-year sentence for his anti-government activities. During his long imprisonment, everything has changed even his fellow anti-government protesters have become mundane. His mother then tells him of the death of Yoon-hee, who harbored and loved him right before he was caught 17 years ago. To cherish memories with her, Hyun-woo goes back to the place where the two had spent a few months together like a couple of honeymooners. Reading through Yoon-hees diaries and letters, Hyun-woo discovers that she was the only one who remained loyal to him to the end. Because of her faith and love, the despair and loneliness that Hyun-woo felt after his imprisonment is slowly healed. He also discovers that Yoon-hee left him another gift behind  their daughter.

View all 29 pictures for "The Old Garden"