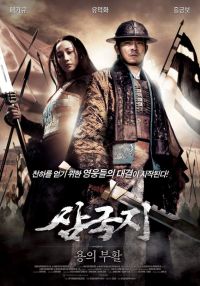 "Three Kingdoms: Resurrection Of The Dragon" is a coproduction between China, Hong Kong and South Korea.

Almost two millennia ago when China was divided, Zhao (Andy Lau), born of humble roots in the kingdom of Shu, becomes a respected hero as he beats warring state Wei. Zhao embarks on his final campaign to unify the three kingdoms, but Cao Ying (Maggie Q) bitterly remembers Zhao defeating her grandfather's army.. Zhao and Cao Ying face each other in their final confrontation.

View all 26 pictures for "Three Kingdoms: Resurrection Of The Dragon"

Three Kingdoms: Resurrection Of The Dragon | Links | Suggest a link