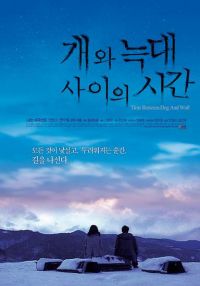 Synopsis
There is a moment after sunset when it is so dark, one cannot tell whether the animal in front of one's eyes is a dog or a wolf. In French, this moment is called the "time between dog and wolf" (Entre chien et loup). It is an anxious time when the distinction between reality and illusion becomes vague, a time that arouses questions about life. A filmmaker returns to his hometown after a twenty-five year absence. There he meets a woman who has been looking for her lost sibling for a long time. As they explore the town together, the filmmaker faces his losses and comes to understand what he was in the process of losing in the future.

Film director Kim receives a sudden call from his cousin Il-kyu. Il-kyu calls to say that his mother will meet his father in Yan Jie, China. The two were separated during the Korean War and Il-kyu asks if Kim could accompany with his mother. On a bus on the way to Sok-cho, Kim sees a girl, Young-hwa and becomes attracted to her. He happens to meet her in a lodging house and follows her to Tae-bak, where she finds her sister. Isolation and the loss of roots of Koreans is shown in the films lyrical scenes.

The French calls twilight as an hour between dog and wolf -- heure entre chien et loup. It is when the border between the present and the past and dream and reality are blurred. The uncertainty creates fear and confusion and turns the ordinary world into something unfamiliar. It is not easy to find what we have lost in life. Sometimes, the journey of search motivates life itself. Like Kim and his film, which linger around the twilight, the film will guide us into an hour between dog and wolf. At the end of the road, we will be given a courage to face to face with things weve lost and things well be losing.

View all 11 pictures for "Time Between Dog And Wolf - Movie"

Time Between Dog And Wolf - Movie | Links | Suggest a link