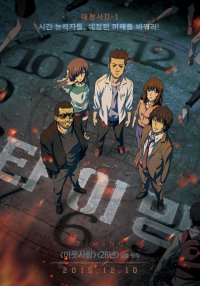 Korea - Japan collaborated to produce the original animation from popular webtoon Timing by Kang Pool.
Synopsis
This film unravels the mystery behind a series of suicides at a high school in Seoul. PARK Ja-gi, a teacher at this school whose mother is a shaman, keeps rejecting mysticism, but he can foresee a catastrophe in his dreams. Witnessing in his dream many people standing aside to jump off from the top of the school building, the school teacher tries tostop the mass suicide. There are some people around the school who also have special gifts. KIM Yeong-tak is a student who can stop time. KANG Min-hyeok can rewind time 10 seconds back but suffers from a guilty conscience about failing to save his own wife and child. Lastly, JANG Se-yun can foresee 10 minutes ahead of time. These people gather their abilities to prevent catastrophe at the school.

View all 39 pictures for "Timing"