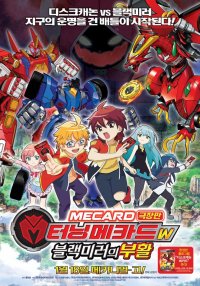 Synopsis
The battle between the revived god of evil, Black Mirror and Team Mechanimal over the fate of Earth begins now!
There is a strange feeling around Earth and Triforce just before the completion of the world's first mechanimal, Disc Cannon.
Black Mirror who was thought to be dead, has revived and is seeking revenge.
He turns all the mechanimals into Black Mechanimals and starts to destroy the world. The tamers start preparing for the final battle in the most dangerous of times...

View all 25 pictures for "Turning Mecard W: The Revival of Black Mirror"