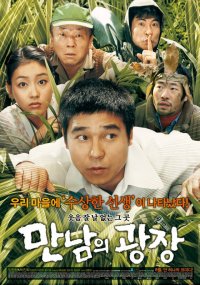 Synopsis
Set in the 1980's, the eldest son of a poor family decides to move to Seoul to become a teacher. Yet as soon as he reaches the city, his money is stolen and his bags are lost. He manages to reach a remote town, where coincidentally they were looking for a new teacher for the town children. He soon falls in love with a woman there, yet her origin seems vague as the townspeople only say she comes from somewhere up North. It turns out the townspeople have been communicating with another bordering town in North Korea through a secret tunnel connecting the two.

View all 70 pictures for "Underground Rendez-vous"