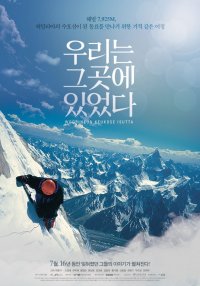 Also known as "Woorineun Keukose Isutta"
Synopsis
In 1995, the expedition team of Korean Alpine Club was headed for Pakistan to climb Gasherbrum 4. While hard working preparing for the new route, there has arrived another expedition to the base camp for the same summit. In the center of that Slovene expedition was 'Slavko Svetičič' with the goal of solo climbing Gasherbrum 4. During the base camp stay these two expeditions from different countries help each other and build friendship.During climbing to reach the top, the Korean expedition was last to see Slavko climbing up. After that there was no more radio contact with Slavko, he was lost.After Slavko went missing, the Korean expedition made a copper plate in memory of him and offered memorial ceremony on the mountain. Since bad weather continued, also Korean expedition has failed to reach the summit on that year.Two years later, in 1997, the Korean expedition again challenged the Gasherbrum 4. At the end of the strenuous efforts, they finally reached the summit with the new route called "Korean Direct''. During descent at 7,200 altitude they came across the body of Slavko revealed by melting snow.They took some rope cut from Slavko as a keepsake for his family, and this same rope could be a help for the expedition in one dangerous situation on their way down the mountain.

We Were There | Cast

We Were There | News

We Were There | Pictures

View all 15 pictures for "We Were There"

We Were There | Videos | Suggest a video

We Were There | Links | Suggest a link

We Were There | Reviews

We Were There | Facts

We Were There | Community

We Were There (우리는 그곳에 있었다)