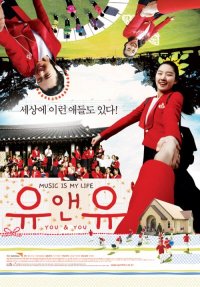 Synopsis
Hard reality...children losing their dreams...
There is a choir that lets them dream again.

The choir has a display of old black and white pictures. Just as their history proves, the World Vision Sunmyeonghwe Choir is a worldwide famous choir with tradition.

Best friends Yeon-joo and Gye-yeong have been in the choir for 7 years. Disciplinary master Gye-yeong has no mercy when it comes to singing and scolds the members of the choir for not putting on a good performance. On the way home, Yeon-joo calms Gye-yeong down saying she's grateful for the fact that she can sing. Seo-yeong is another member of the choir. She's running out of breath because of her mother who's relying on her to relieve the pressure from other members of the family who happen to be from elite universities and into law. Her mother's daily plans and observations are exhausting Seo-yeong. Her only way out is the choir. She feels alive when she is singing.

Then there is a solo audition. Seo-yeong is chosen for her outstanding performance but her mother is against it and she quits the choir. Yeon-joo and Gye-yeong tied but Yeon-joo gets chosen as a solo and Gye-yeong hesitantly congratulates her. She overhears a conversation between the choir teacher and Yeon-joo in the practice room and Gye-yeong shakes with feelings of betrayal. Gye-yeong becomes angry because she trusted Yeon-joo and soon after, their friendship ends. The next day, the members of the choir surround Yeon-joo and start asking her questions. Misunderstandings led to bigger minunderstandings. No one will listen to her. She runs out of the practice room and the choir is disordered with the absence of Seo-yeong and Yeon-joo with the choir competition coming up soon.

Meanwhile, Seo-yeong feels suffocated in the reality that feels like a glass box to her when she stumbles upon the sound of a band practicing. She joins the street band as a singer and although there's no harmony or an audience applauding them, she's happy that she can sing again. However, her mother discovers her singing in the streets...her face is burning from the slap and she's being dragged home...

On the day of the choir competition, the World Vision Choir is up soon but Gye-yeong is nowhere to be seen.

The great times we had singing together...
The harmony that made you, me and us exist...
Will they be able to sing again...?

You and You | Cast

You and You | News

You and You | Shopping

You and You | Soundtracks, OST (Sponsored)

You and You | Pictures

View all 17 pictures for "You and You"

You and You | Links | Suggest a link

You and You | Reviews

You and You | Facts

You and You | Community