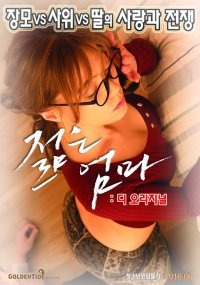 Jin-goo and Joo-hee were happy until one day their daughter Hwa-yeong, who had eloped with another man, came home. Hwa-yeong and Jin-goo were a couple at school and she had gotten pregnant. So things took place quickly and they got to live with Hwa-yeong's mother Joo-hee. However, when Hwa-yeong found out she wasn't pregnant, hit it off with another man and left the house. Jin-goo and Joo-hee had fallen in love while she was gone. Hwa-yeong had broken up with her other man and came home. However, she finds it weird that Jin-goo is still at her mother's house. Jin-goo and Joo-hee put out all sorts of lies to hide the truth from Hwa-yeong.
Hwa-yeong wants Jin-goo back and Joo-hee tries not to let her take him. Jin-goo is also stuck in the middle and doesn't know what to do...

View all 13 pictures for "Young Mother: The Original"