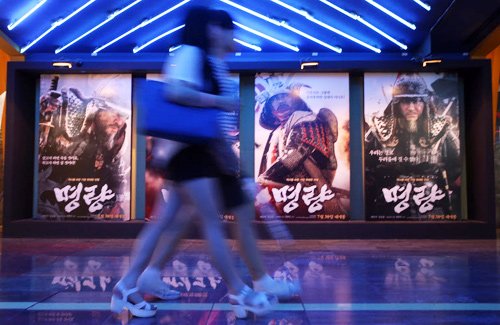 A strip of posters adertises the film "The Admiral: Roaring Currents" in Seoul on Sunday.

"The Admiral: Roaring Currents", the story of Korean history's most astonishing military victory by Admiral Yi Sun-shin, has set new records in the country's cinematic history. In just five days since opening on July 30, the movie has drawn 4 million viewers, the shortest time on record.

It already set the record for the most viewers on its first day at 683,072 and surpassed the 1 million mark in just 37 hours, another new milestone.

Previous top blockbusters "Avatar", "The Host" and "The Thieves" broke the 1 million mark in three days, and "Masquerade" and "The Attorney" in four.

On Saturday, "The Admiral: Roaring Currents" drew 1.23 million viewers to become the first Korean movie to pull more than a million people to the box office in a single day. The previous record was held by "Transformers: Dark of the Moon" in 2011, which drew 956,500.

At this rate, "The Admiral: Roaring Currents" is expected to pull in 5 million moviegoers in its first week.

The mass appeal of the film is due to Admiral Yi's fame. The equivalent of Britain's Lord Nelson, his name is known to every Korean. Demographic data shows that "The Admiral: Roaring Currents" is drawing viewers of all ages and both genders.

Yoon In-ho at distributor CJ E&M said, "The movie definitely appeals to older audiences since it is a historical piece, but younger viewers, who didn't know very much about Admiral Yi, are also flocking to theaters. They seem to have rediscovered a national hero".

The movie stays fairly true to the historical record, and this has proved more effective than fiction. The hour-long naval battle scenes are highly realistic and exciting and have been one of the key factors pulling audiences.

The Korean movie industry entered a slump in the first half of this year with the lowest number of moviegoers in three years. Two movies that opened after the April 16 ferry -- "No Tears for the Dead" and "Man on High Heels" -- drew fewer than 1 million viewers. Audiences stayed away from violent films as they sought solace from the tragic accident.

There were fears that the solemn tone of "The Admiral: Roaring Currents" would put people off, but that has not been the case.

"The Admiral: Roaring Currents" deals with a national maritime hero, which may have appealed at a time when the present authorities have proved less than heroic or able in the wake of the ferry disaster.

Movie critic Jeon Chan-il said, "From a modern-day perspective, he is a superhero who saved his people, and a major attraction is that it makes you think again about leadership".

Late July and early August is the peak season for movies. All the biggest box-office draws -- "The Host", "Haeundae" and "The Thieves" -- were released in the middle of the last week of July.

"Koreans Flock to Period Flick About War Hero"
by HanCinema is licensed under a Creative Commons Attribution-Share Alike 3.0 Unported License.
Based on a work from this source