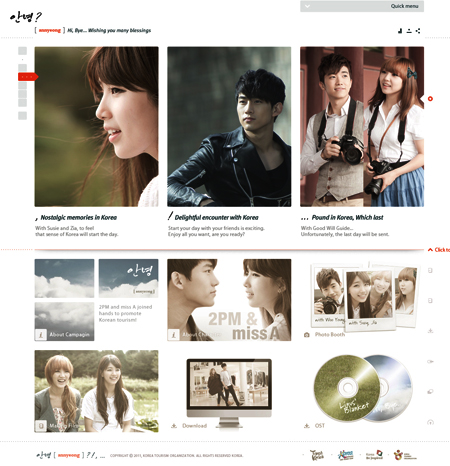 Snapshot of the interactive film, "Annyeong", featuring K-pop stars, Miss A and 2PM. Users can access the interactive movie at www.ibuzzkorea.com and go on a three-day virtual tour with the singers. / Courtesy of KTO

K-pop stars are at the forefront of "hallyu" or the Korean wave, and they are stepping up as spokesmen and spokeswomen for Korea.

Korea Tourism Organization (KTO) is jumping on the bandwagon with interactive features that will present potential tourists with fascinating virtual experiences.

The institute opened "Holiday Greetings from K-stars" at the Tourism Information Center (TIC) Monday. K-pop star Miss A accompanied Lee Charm, the CEO of KTO, at the opening ceremony.

What caught many visitors' attention was the preview of the movie "Annyeong" featuring K-pop stars, Miss A and 2PM.

It is an interactive movie about a three-day trip to Korea. Shot from a first-person perspective starting with a scene on the airplane to Korea, the user can start by typing in his or her name.

Then, Ok Taecyeon from 2PM greets the user on his motorcycle to take him or her to eat Korean cuisine and shop for the hot trends in Seoul. 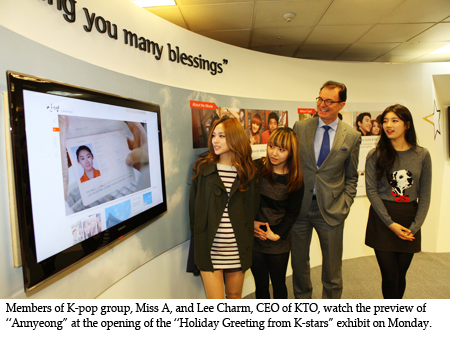 On the second day, the user can visually experience a day in a"hanok", a Korean traditional house with Jia and Suzy from Miss A.

On the last day of the virtual trip, the user can choose between Min of Miss A or Wooyoung of 2PM to be the guide while visiting historical sites like Gyeongbok palace.

Small online games such as managing to eat spicy "nakjibokeum", octopus stir fry, by cooling off with watery kimchi and picture-taking tasks keep the user engaged.

More importantly, the overall film looks like a music video of a K-pop star and it provides a romantic picture of touring Korea.

The film is one of the many programs available at Buzz Korea (www.ibuzzkorea.com), a KTO website, under the Touch Korea menu. Touch Korea is an initiative of KTO's 2011 Interactive campaign that strives to simulate a virtual Korean experience.

A program titled "Ireum", which translates to mean "name" in the Korean language, allows the users to type in their name, gender, birthday and time of birth to acquire a Korean name according to the person's saju and accompanied by the meaning of the name.