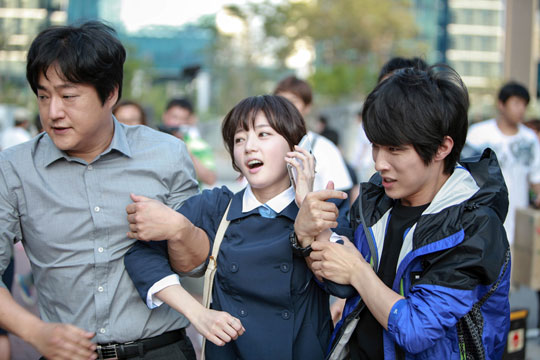 Kwak Do-won earned himself the nickname 'crazy cow' for the way he shows strong initiative in investigating a crime in the SBS drama "Ghost - Drama". Song Ha-yoon is also known as the soaked potato, a reporter who helps Kwon Hyeok-joo (Kwak Do-won).

The two have started to investigate the Sin Hyo-jeong vase and they might have a little romance going on between them.

On he eighth episode, a bug was planted by Jo Hyeon-min's (Uhm Ki-joon) pawn. When Kwon didn't want to let Choi Seung-yeon listen to the contents, she made a move to get rid of the bug and eventually agreed on working together.

Those who have seen the show say, ",The two make the drama even more pleasurable", "Let them lobe already", "I can't wait for the next one" and more.

Song Ha-yoon said, "Kwak Do-won is very good to be and I feel comfortable so that's how we create fun scenes".

Meanwhile, "Ghost - Drama" will be aired every Wednesday and Thursday at 9:55PM.

"Kwak Do-won and Song Ha-yoon look good together"
by HanCinema is licensed under a Creative Commons Attribution-Share Alike 3.0 Unported License.
Based on a work from this source