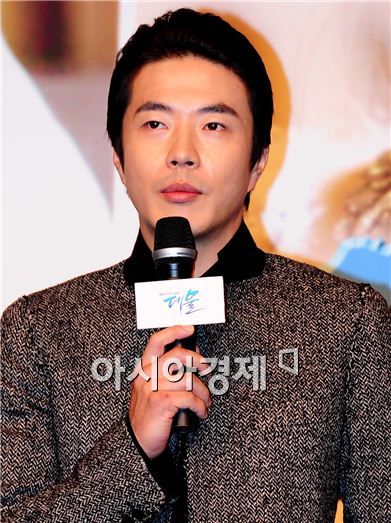 Actor kwon Sang-woo on Wednesday appeared in front of the public for the first time since being charged with fleeing the scene of a car accident, apologizing for the incident and saying he almost reconsidered playing his role in upcoming SBS TV seires "Daemul - Big Thing".

"In the beginning, I felt bad for whichever actor I ran into on set and was worried I would be a burden for the series, so I even thought of whether I should take on this drama or not", the 34-year-old actor said after apologizing for the incident during a press conference for the show.

He also admitted he had been "very low on confidence" but said he decided to present himself to the audience because "whether whipped or praised for the incident, I am someone who is known as an actor to many people".

He then thanked his co-stars Go Hyun-jung and Cha In-pyo for their support. "They give me good energy, even just with their expressions. I've recovered a lot of my confidence while filming with them", Kwon explained.

Ko plays the role of the woman dreaming to become Korea's first female president and Cha her rival, a strong presidential candidate of the ruling party. Kwon is a male gigolo who tries to help Ko's character achieve her dream.

Based on a popular comic series of the same name, the series is set to air starting October 6 after current drama "My Girlfriend is Gumiho" starring Lee Seung-gi and Shin Min-ah ends its run.

In late July, a court had fined Kwon seven million won, equivalent to nearly 6,000 dollars, for deserting the scene of an accident he caused after crashing into several vehicles in mid-June. He was charged with not taking immediate action for the damage.

"Kwon Sang-woo says pondered over "Daemul - Big Thing" after car accident"
by HanCinema is licensed under a Creative Commons Attribution-Share Alike 3.0 Unported License.
Based on a work from this source