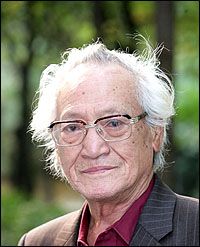 Master director Yu Hyun-mok passed away Sunday due to a combination of cerebral infarction and diabetes during treatment at Dongguk University Hospital in Ilsan, Goyang, Gyeonggi Province. He was 84.

The veteran filmmaker is to posthumously receive the Geum-Gwan Order of Culture Merit, the highest honor bestowed by the Ministry of Culture, Sports and Tourism, it was announced Monday.

Born in Sariwon, Bongsan-gun, Hwanghae Island (now part of North Korea) in 1925, Yu attended Whimoon High School and studied Korean literature at Dongguk University. He debuted in 1956 with "The Crossroads" and rose to prominence as one of South Korea's key neo-realist auteurs of the post-war period, alongside Shin Sang-ok (1926-2006), Kim Ki-young (1919-1998) and Kim Soo-yong (1929-). In his 30s at the time, he was at the height of his career and free from ideological pressures to make propaganda or anti-communist film in order to pursue his unique visions.

His extensive filmography includes around 40 films that reflect his outlook on social injustice, existential crises, nihilism and the bleak aftermath of war, as well as religious and humanistic views.

Yu's 1961 film "The Aimless Bullet" is considered, along with Shin's "Mother and a Guest" (1961) and Kim Ki-young's "The Housemaid - 1960" (1960), one of the big three films of post-Korean War (1950-53) cinema. Based on a short story by Lee Bum-sun, the movie is regarded by critics to have driven the development of Korean cinematic realism ("Korean Cinema: From Origins to Renaissance"; Korean Film Council). After the Military Coup on May 16, 1961, however, "Bullet" was banned for its stark depiction of society.

In the early '60s, Yu took part in the creation of the country's first color films via Cinemascope, and used bold close-up shots to make up for the simple and flat look of the medium in "Kim's Daughters" (1963). The director also ventured into the genre of epic action films and helmed the historical biopic "Great Hero, Lee Sun-sin" (1962).

Other notable films include "Lim Kkeok-jeong" (1961), "The Extra Mortals" (1962), "Bun-Rye's Story" (1971) _ whose original was recently recovered by the Korean Film Archive _ and "The Empty Dream" (1965). The latter piece, which depicts a dentist's sadistic relationship with a woman, particularly created a stir for its surreal theme and experimentalism influenced by Soviet Montage editing and German Expressionist mise-en-scene, according to the Korean Film Archive.

In the '70s, Yu had passed his nihilistic period to deal with matters of human life and death and religion. It is said that he was deeply influenced by Swedish director Ernst Ingmar Bergman and Russian master Andrei Tarkovsky.

A ceremonial funeral hall for Yu has been set up at Seoul St. Mary's Hospital in Banpo-dong. The funeral cortege is slated to leave the hospital on Thursday, and will travel through Chungmuro, downtown Seoul, which is often considered the birthplace of Korean cinema and where Yu produced his films. The burial will take place in Maseok, Gyeonggi Province. Director Kim Soo-young will preside over the funeral service with actor Lee Deok-hwa and Jeong In-yeop, head of the Korea Film Directors' Society Incorporated.

Yu is survived by his wife, painter Park Geun-ja.

"Late Film Director Yu to Get National Order of Culture Merit"
by HanCinema is licensed under a Creative Commons Attribution-Share Alike 3.0 Unported License.
Based on a work from this source