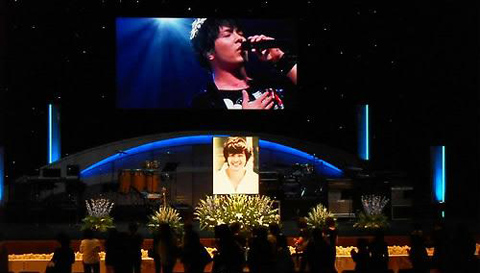 A film concert tour to pay tribute to the late Hallyu star Park Yong-ha, who died last June, is being held all around Japan until March 29.

According to Park Yong-ha's official Japanese webpage on March 10, the film concert entitled "Park Yong-ha Films 2004~2010 We LOVE Yong Ha" has begun in Niigata on March 5, and it will be held a total of 23 times in eleven cities in Japan including Hiroshima, Fukuoka, Hokkaido, Osaka, and Tokyo until March 29. During the concert, Park Yong-ha's performances that he had shown in his living years will be screened.

In the first film concert, which was held at the Niigata City Performing Arts Center on March 5, the late Park Yong-ha's mother Uh Young Ran and his older sister Park Hye Yeon and her husband attended and watched his appearances on film together with his fans. His mother Uh Young Ran said, "I really thank you for still remembering my son and coming here to see him on the screen. Even though we could not see him again in person, I think that he may have watched this film together with us. He seemed to still be alive when I watched the film in which he sings enthusiastically".

"Late Park Yong-ha's Film Concert in Japan"
by HanCinema is licensed under a Creative Commons Attribution-Share Alike 3.0 Unported License.
Based on a work from this source