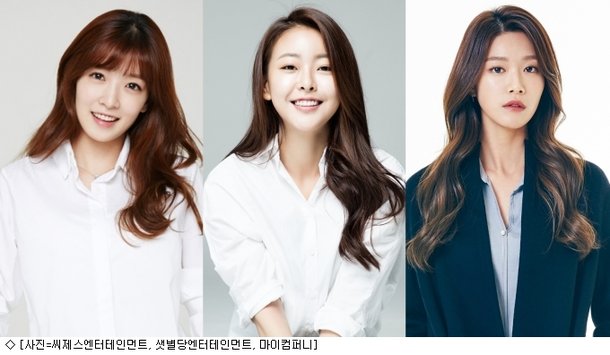 "Laughter in Waikiki" is a youthful drama about Dong-goo who dreams of becoming a movie director, Joon-gi who is quite quirky, and Doo-sik who is a freelance writer. The three live in a guest house that's about to go out of business.

The three unlucky men meet a single mother and her baby, which is when the unexpected happens. In addition to Kim Jung-hyun, Lee Yi-kyung, and Son Seung-won staras the unlucky three men while Jung In-sun, Go Won-hee, and Lee Joo-woo will join them.

Jung In-sun is the single mother who finds herself in the guest house. She's energetic, but does nothing right and had her first child, Sol, when she was twenty-five. She does the housework in the guest house and starts to live with the unlucky three gents.

Go Won-hee takes on the role of Seo-jin, a highly influential person. She is Dong-goo's sister who dreams of becoming a reporter. She's immature and lazy, but takes care of the unlucky three and cleans up after them.

Lee Joo-woo takes on the role of Soo-ah who is full of bluff. She's a beautiful fitting model who is always the center of attention wherever she goes. She pretends to be smart and sophisticated, but she's always fooled by people or used. She's also Dong-goo's ex-girlfriend.

"Laughter in Waikiki" will begin in February after "Just Between Lovers".

""Laughter in Waikiki" Casts Jung In-sun, Go Won-hee, and Lee Joo-woo "
by HanCinema is licensed under a Creative Commons Attribution-Share Alike 3.0 Unported License.
Based on a work from this source