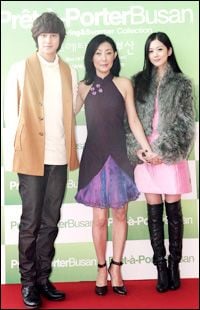 It's been a little over a year since designer Lea Seong established her own fashion company in Shanghai, but there's a lot of attention surrounding her completely feminine designs made of milk fabric.

Seong made a splashy debut in Korea with her women's wear collection at the Pret-a-Porter Busan fashion show in late November.

In an interview with The Korea Times, Seong said she wanted her clothes to be recognized for their distinctive style.

"I want the Lea Seong brand to be known as a feminine line, with full skirts, fringes, soft touches and utter femininity. I want it to be very attractive and get people's attention", she said.

Seong was delighted to have been invited by Model Center president Toh Shin-woo to participate at the Pret-a-Porter Busan. She presented her 2010 spring and summer collection inspired by the free-spirited flapper women of the 1920s, with swishy mini-dresses in bright colors and hand-painted detail.

A model wears a flapper-style dress design by Lea Seong.

"I felt like I wanted to go out more, do more and engage in new challenges. I found the flapper women an inspiration for me as I faced challenges", she said.

Seong has come a long way from her days of working at Calvin Klein in New York to becoming the first foreign member of the China Fashion Designers Association in China.

A graduate of fashion design from Chung-Ang University in Korea and Parsons School of Design in New York, she has had years of extensive experience in the fashion industry in New York. She started at Calvin Klein, but the dream job didn't exactly turn out as she expected.

"In the beginning, they asked me to just cut tiny swatches of fabric from the color library. It was not a very exciting job and it wasn't what I was dreaming about when I wanted to become a designer", she said.

Seong soon worked her way up in the company, but she continued to dream of designing her own collection. "It's a fantastic title to be `assistant designer' or `head designer', but you are not Calvin Klein. I realized that later, so I woke up and I started to seriously think about doing my own collection", she said.

To gain more experience, Seong decided to move to smaller companies, where she had a chance to learn about the different aspects of the fashion business.

Seong moved back to Korea to spend more time with her parents, but also to try to start her own business. "I was looking for a unique point for my brand. My name was not known and I had no relationships in Korea at all. That's when I discovered my selling point: organic milk fabric", she said.

After finding out that a Chinese company had the license to make the organic milk fabrics, Seong sought them ought and convinced them of its potential for fashion. She quickly established her own company in Shanghai, and incorporated milk fabric into her designs. Milk fabric is made from fibers extracted from dried liquid milk proteins using a special technology.

"Milk fabric is very soft, practical and affordable. You don't have to dry clean clothes that are made of milk". Seong said.

In China, she is the only designer using milk fabrics for garments, and staged the fashion show "Milk and Me" in March.

While her company is still young, Seong has high hopes for the future. "My dream is that someday people will be wearing T-shirts, pants and dresses made of milk", she said.