Learning about coexistence on Jeju 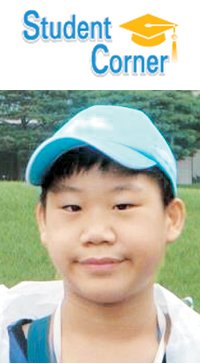 I went to the "2012 HSBC Island Watch for a Future Generation Camp". This camp is one of the best recognized environmental camps for teenagers in Korea, which HSBC Korea and the Green Education Center has been hosting for more than 10 years.

It is designed to help middle school students learn about, experience and recognize the importance of the environment.

When I saw a poster for this camp on my school bulletin board, it really attracted me to apply for it. But there was a tough selection process to go through first. The first task to be accepted was to write an essay on the theme of "My Desired Village".

Over 800 students sent in essays to the camp organizer and only 160 were selected out of all the applications.

After the essay screening, I had to participate in a half hour-long, face-to-face interview. It was so hard to survive in order to become one of the 80 students who would finally join the camp, but it happened. When I first heard this news, I could not believe it because the other applicants were so much smarter than I was.

During the interview, I tried my best to show my enthusiasm and admiration for the camp and luckily this helped my application to become successful. From that experience, I gained a lot of confidence in myself.

The theme of this year's camp was "Cooperation and Sharing on Jeju Island". Jeju Island is a great place to learn about this. The island is one of the most popular tourist destinations in Korea due to its beautiful scenery and mild climate.

However, many people don't know that it is also a symbolic place for peace in the world and perfectly realizes a symbiotic coexistence which means two or more groups living together while respecting their differences and resolving their conflicts in nonviolent ways.

I found three symbiotic coexistent things on Jeju Island during the camp that I would like to share.

The first thing I learned is Jeju's culture. Geographically, its relative isolation from mainland Korea led to a unique dialect and life style. People on the island developed Jeju-style community over hundreds of years.

There are over 100 villages that maintain a unique form of community living, which is rather like a cooperative. I visited an organic tangerine cooperative farm and Dong Baek (Camellia) Village to learn from local residents.

I got the impression that members of this village don't care about individual benefits as much as city people do; they focus more on what benefits the entire community.

If someone in the village gives birth to a baby, for example, all of the inhabitants congratulate the news and celebrate the happy occasion together. They all work together.

In Korean, we call this "jeong". The meaning of this word is "affection for others". Just imagine. If you love your neighbor, community, and the whole earth, where's the place that sadness can take hold?

I believe that big changes start from small ideas. The solution to conflict and difficulties in society is to embrace differences and diversity to pursue symbiotic coexistence. That's my first finding.

The second symbiotic coexistent thing I found is the nature of Jeju. For a week, we traveled to several forests and experienced the wonderful power of nature.

I realized that I am part of nature and we should live together to follow nature's symbiotic co-existence principle.

While I played these games in the forest, I felt like the trees and flowers. In the forest, there are many different species living there. A camp teacher told me that they formed a symbiotic community in the forest where people are not greedy, but live in harmony.

There's no king to conquer them and also no bullying. They just live together and help each other to grow in peace. I learned that you shouldn't let greed over take you. I know that humans cannot be easily satisfied and we need energy to move our world forward.

My opinion is to help each other and encourage everyone to be a productive member of society so no one feels like an outsider as nature shows us through its symbiotic co-existence.

Lastly, I found reason to pursue symbiotic co-existence from the team work in the camp. My teammates were very smart and brilliant and shared their ideas and experiences to make our team great.

One was very creative at planning and the other had leadership skills to organize a plan to be realized. We helped each other and exchanged our thoughts for the tasks given and achieved our goal together.

It was a great experience to make intimate friendships with students from various cities and counties in Korea. I will always remember the beautiful scenery on Jeju and my fantastic experience in the 2012 summer vacation.

I believe these unforgettable memories will change my attitude towards nature and also my daily life. I realized that I am part of nature and we should live together to follow nature's symbiotic co-existence principle.

The writer is a second-year student at Seoul Isu Middle School.

"Learning about coexistence on Jeju"
by HanCinema is licensed under a Creative Commons Attribution-Share Alike 3.0 Unported License.
Based on a work from this source