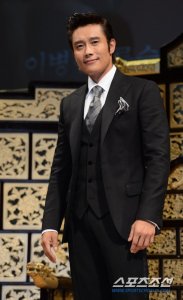 When he was interviewed by The Korea Herald in November 2006, Lee Byung-hun expressed some doubts about whether he could make it in Hollywood.

His skepticism, which partly reflected his measured approach in entering the world's biggest entertainment market, seems fairly overdone. A string of news items about his Hollywood stint keep coming in, and his acting career is going at a fast clip.

In mid-March, Lee completed his first day of shooting as Storm Shadow in Paramount Pictures' action adventure "G.I. Joe", to be released in October 2008. This week, a couple of photographs have been made public on the Web so that people can see him as one of the most popular characters in the G.I. Joe franchise. Clad in white, Lee seems primed to play a dark, complex character trained by a ninja master.

"G.I. Joe" will mark Lee's full-fledged foray into Hollywood, a crucial development in what has already been a colorful career. Popular in Korea and Japan, Lee has long prepared to broaden his acting range and his fame. To that end, he is said to have made a serious effort to improve English proficiency.

Lee is also expected to enhance his stature at film festivals this year.

He starred in director Kim Jee-woon's latest feature, "The Good, the Bad, the Weird", and also performed in the Vietnamese filmmaker Anh Hung Tran's "I Come with the Rain".

"The Good, the Bad, the Weird", set in Manchuria, features a bandit, a train robber, and a bounty hunter, and, with its big-name casting and a sizable budget, it is considered one of the country's biggest film projects this year.

Local media reported yesterday that "The Good, the Bad, the Weird" has been invited to the noncompetition section of the Cannes film festival, which begins May 14. Cannes organizers held a press conference in Paris, finalizing the list of four films, including director Kim's feature, in the noncompetition category and 19 movies that will compete for the Golden Palm award.

"I Come with the Rain", also speculated to have a chance to join Cannes, is a multinational project in which Lee has reunited with the Japanese star Takuya Kimura. Last year, Lee played a Korean chief of detectives in Hero, whose central character is a quirky Japanese prosecutor played by Kimura.

On the domestic front, Lee has signed a contract with Taewon Entertainment and Kang Je-gyu Film to co-produce and star in "IRIS", a whopping $22 million Korean TV series. Leading producer Lee Hyeong-min will take charge of the expensive project, and the shooting is scheduled to begin later this year.

"Lee Byung-hun broadening his acting career overseas"
by HanCinema is licensed under a Creative Commons Attribution-Share Alike 3.0 Unported License.
Based on a work from this source