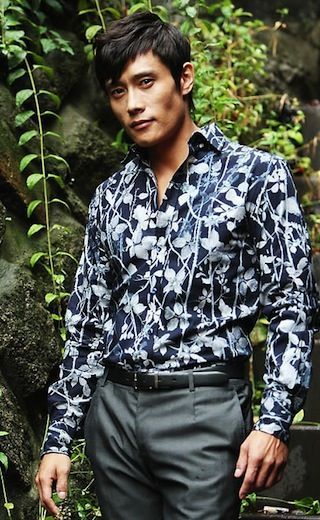 Actor Lee Byung-hun keeps expanding his screen presence. Following the last year movie "The Good, the Bad, the Weird", which was invited to the Cannes Film Festival, Lee has debuted in Hollywood in the movie "G.I. Joe: The Rise of Cobra" and appeared in the joint French-American film "I Come With The Rain". His new TV drama "IRIS" will go on the air late this year.

All of Lee's recent works were filmed overseas. "I Come With The Rain", which will be released next month at the Pusan International Film Festival, also stars the Hollywood star Josh Hartnett and the Japanese actor Takuya Kimura. The movie was directed by the Vietnam-born French director Tran Anh Hung. It is his first production since 2000, when he produced "At The Height Of Summer".

Lee says he hesitated for one year before taking his role in the movie, and that he regarded it as an experiment. "When I first saw the script, I found it too abstract. I was scared because I didn't understand this production fully. There was little that a world-renowned film producer knew about me. He must have only heard my name and a couple of my roles. So I wondered how I looked in the eyes of a director who had no bias against me and how he would use me", said Lee.

In "I Come With The Rain" Lee plays the boss of the Hong Kong mafia. He receives a request from a former detective, who is played by Josh Hartnett, to find Shitao - the missing son of a billionaire. But he is surprised to find him together with his girlfriend, Lilly. Enraged, he begins to pursue Shitao.

Lee calls "I Come With The Rain" a "turning point" in his acting career. "I had been waiting for a production that would move me. This movie helped me open up my heart. I was interested but scared, but then I decided to face the dragon. Though acting is my lifelong profession, I can't say for sure how long I'll be able to act in good condition", said Lee.

The actor was confused at first to see the director of the movie let the cast act as they wanted, but once he got used to his style, it turned out to be a whole new experience. "The director told us to do what we wanted. He said that the cameras will just follow us. Though each appears on screen for only 5 seconds, in reality I had to act for one or two minutes without any directions whatsoever. It was very difficult, but when I got used to that, I liked it a lot".

Lee says once he even ended up crying when filming a scene, because he was too immersed in his emotions, but right at that moment the director said "Cut". He added, laughing, that the scene was cut out in the end.

Lee hesitated for one year before deciding to take his role in "I Come With The Rain". It took him a couple of months to decide on "G.I. Joe: The Rise Of Cobra" and only a month to take "The Good, the Bad, the Weird". Interestingly enough, the shooting schedule of "I Come With The Rain" coincided with "The Good, the Bad, the Weird". "I was overwhelmed back then, but in the hindsight it all looks very hectic to me now. At first I thought that traveling from China to Hong Kong would be nothing, but since we were filming in the back regions of China, we had to switch flights three times. The waiting time only combined to 13 hours. During the third trip, I became a wreck. I had a sore throat and fever. For the first time in my life I visited a hospital abroad".