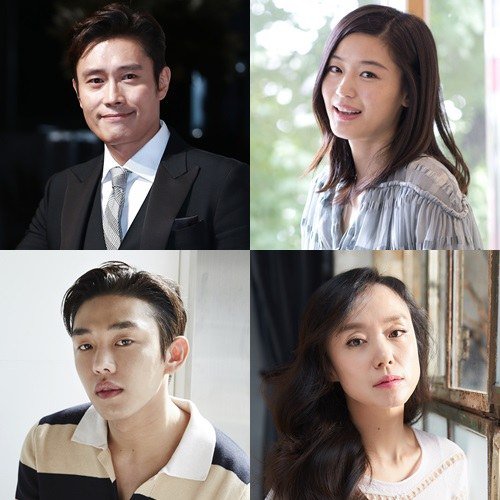 Actors Lee Byung-hun, Jun Ji-hyun, Yoo Ah-in and Jeon Do-yeon are competing for the Best Actor and Actress at the 2016 Chunsa Film Awards.

The Awards is being held on the 5th at COEX. Chunsa Na Woon Gyu Film Festival is a nonprofit competition to pay tribute to the passion and fighting spirit of movies. The award consists of 10 categories including the Best Director, the Best Actor and the Best Actress.

Meanwhile, the Chunsa Film Awards is not applied by acceptance but 5 movie critics (Kim Jong-won, Jo Hye-jeong, Hwang Yeong-mi, Kim Yeong-jin, Kim Hyeong-seok) pick out the list and go through discussions with directors who are currently active.

"Lee Byung-hun, Jun Ji-hyun, Yoo Ah-in and Jeon Do-yeon at the 2016 Chunsa Film Awards"
by HanCinema is licensed under a Creative Commons Attribution-Share Alike 3.0 Unported License.
Based on a work from this source