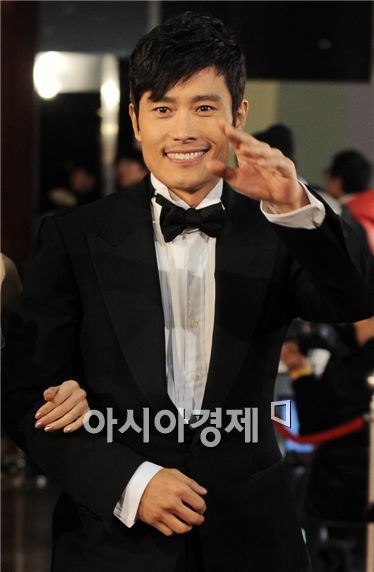 Korean star Lee Byung-hun will be recognized as the most influential Asian artist at the China Music Award and Asia Influential Awards (CMA) to be held Sunday, according to his agency BH Entertainment.

Lee will be the first Korean actor to receive the prestigious award at the CMA co-sponsored by the Chengdu Foreign Cultural Exchange Association and mass media group Channel V.

The event, now into its 14th year, will take place at the International Tennis Center located in the Sichuan region.

The awards ceremony will be broadcasted live in all of China and telecasted to 53 different countries including Hong Kong, Macao, Singapore, Indonesia and Taiwan.

Other noteworthy mentions are Chinese actors Jet Li, Jay Chou and Donnie Yen who will receive the award for most influential Chinese actors.

Lee, who made his debut in 1991, has long been considered one of the most successful actors in Korea with dozens of television dramas and films under his belt.

He had a particularly successful year in 2009, making his Hollywood debut in action flick "G.I. Joe" and co-starring with Josh Hartnett and Takuya Kimura in "I Come With The Rain".

He also led a star-studded cast in blockbuster drama "IRIS", for which he picked up the grand prize at KBS Acting Awards.

"Lee Byung-hun named most influential Asian actor at CMA"
by HanCinema is licensed under a Creative Commons Attribution-Share Alike 3.0 Unported License.
Based on a work from this source